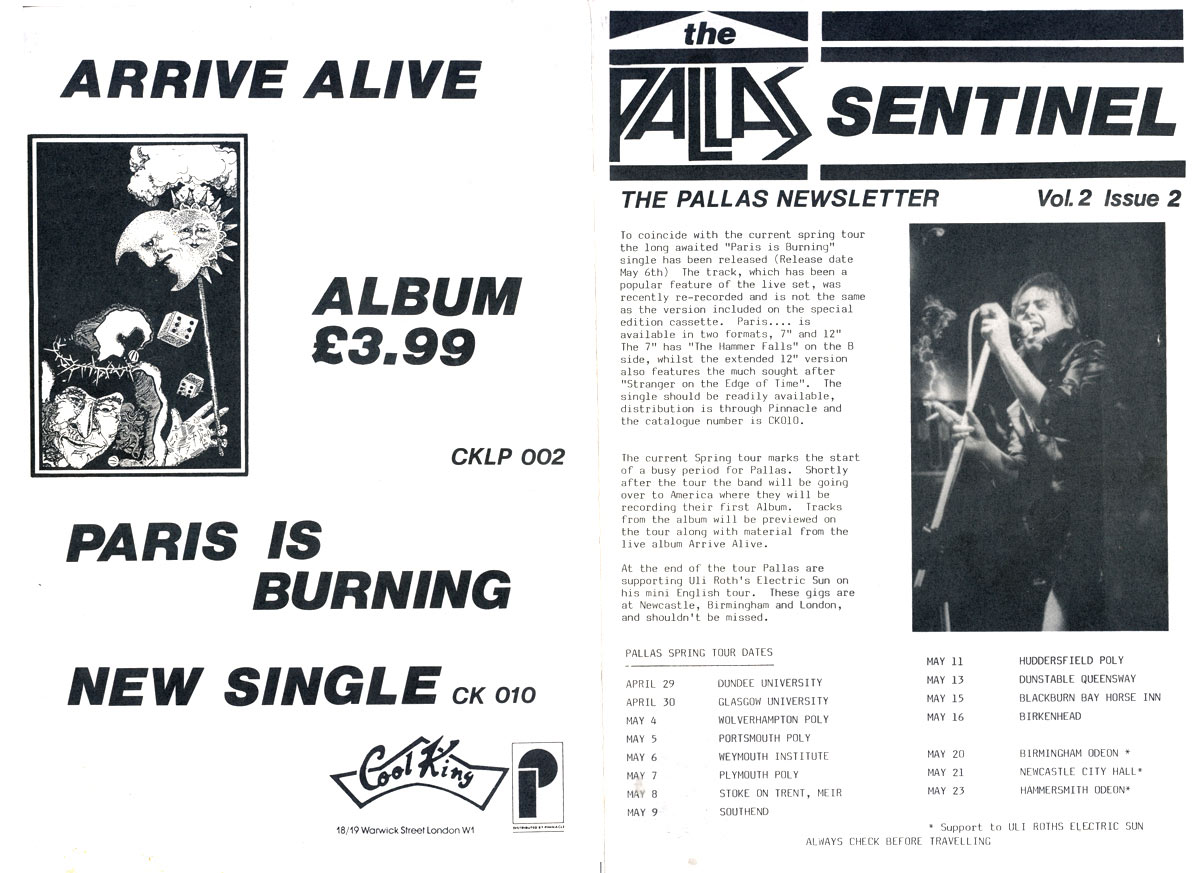 To coincide with the current Spring tour, the long awaited "Paris Is Burning" single has been released (release date May 6th). The track, which has been a popular feature of the live set, was recently re-recorded and is not the same as the version included on the special edition cassette. Paris... is available in two formats, 7" and 12". The 7" has "The Hammer Falls" on the B sde, whilst the extended 12" version also features the much sought after "Stranger On The Edge Of Time". The single should be readily available, distribution is through Pinnacle and the catalogue number is CK010.

The current Spring tour marks the start of a busy period for Pallas. Shortly after the tour the band will be going over to America where they will be recording their first album. Tracks from the album will be previewed on the tour along with the material from the live album Arrive Alive.

At the end of the tour Pallas are supporting Uli Roth's Electric Sun on his mini English tour. There gigs are at Newcastle, Birmingham and London, and shouldn't be missed. 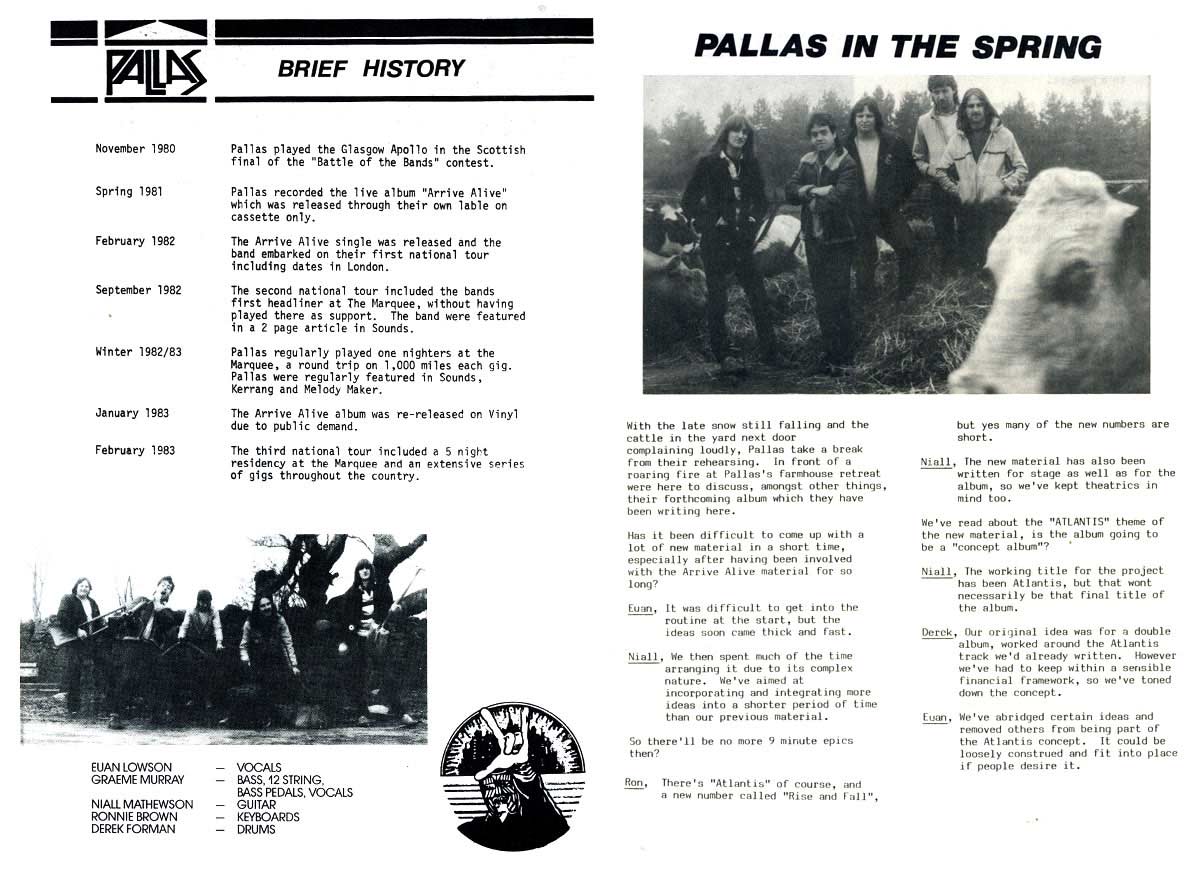 PALLAS IN THE SPRING

With the late snow still falling and the cattle in the yard next door complaining loudly, Pallas take a break from their rehearsing. In front of a roaring fire at Pallas's farmhouse retreat we're here to discuss, amongst other things, their forthcoming album which they have been writing here.

Has it been difficult to come up with a lot of new material in a short time, especially after having been involved with the Arrive Alive material for so long?

Euan: It was difficult to get into the routine at the start, but the ideas soon came thick and fast.

Niall: We then spent much of the time arranging it due to its complex nature. We've aimed at incorporating and integrating more ideas into a shorter period of time than our previous material.

So there'll be no more nine-minute epics then?

Ron: There's "Atlantis" of course, and a new number called "Rise And Fall", but yes, many of the new numbers are short.

Niall: The new material has also been written for stage as well as for the album, so we've kept theatrics in mind too.

We've read about the "Atlantis" theme of the new material, is the album going to be a "concept" album?

Niall: The working title for the album has been "Atlantis", but that won't necessarily be the final title of the album.

Derek: Our original idea was for a double album, worked around the Atlantis track we'd already written. However, we've had to keep within a sensible financial framework, so we're toned down the concept.

Euan: We've abridged certain ideas and removed others from being part of the Atlantis concept. It could be loosely construed and fit into place if people desire it. 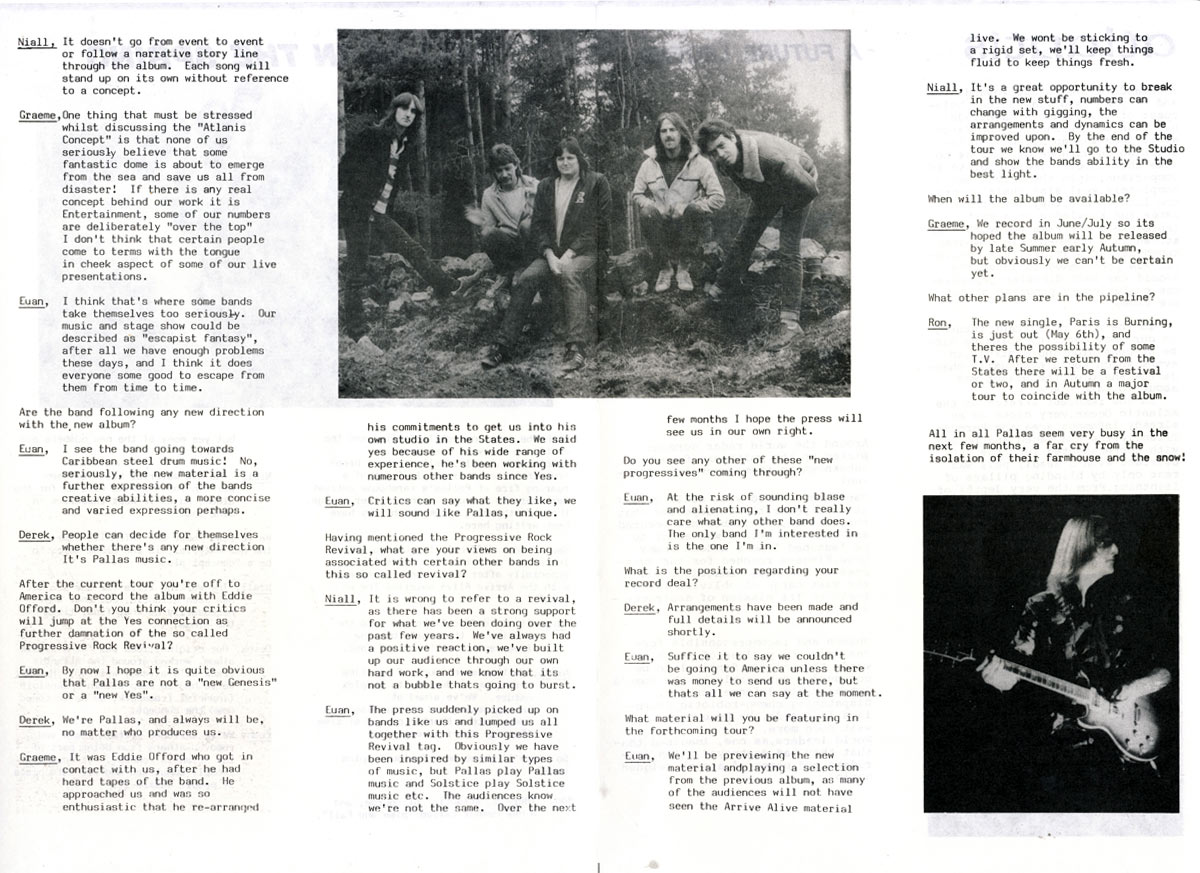 Niall: It doesn't go from event to event or follow a narrative story line through the album. Each song will stand up on its own without reference to a concept.

Graeme: One thing that must be stressed whilst discussing the "Atlanis Concept" is that none of us seriously believe that some fantastic dome is about to emerge from the sea and save us all from disaster! If there is any real concept behind our work it is Entertainment, some of our numbers are deliberately "over the top" I don't think that certain people come to terms with the tongue in cheek aspect of some of our live presentations.

Euan: I think that's where some bands take themselves too seriously. Our music and stage show could be described as "escapist fantasy", after all we have enough problems these days, and I think it does everyone some good to escape from them from time to time.

Are the band following any new direction with the# new album?

Euan: I see the band going towards Caribbean steel drum music! No, seriously, the new material is a further expression of the bands creative abilities, a more concise and varied expression perhaps.

Derek: People can decide for themselves whether there's any new direction It's Pallas music.
After the current tour you're off to America to record the album with Eddie Offord. Don't you think your critics will jump at the Yes connection as further damnation of the so called Progressive Rock Revival?

Euan: By now I hope it is quite obvious that Pallas are not a "new Genesis" or a "new Yes".

Derek: We're Pallas, and always will be, no matter who produces us.

Graeme: It was Eddie Offord who got in contact with us, after he had heard tapes of the band. He approached us and was so enthusiastic that he re-arranged his commitments to get us into his own studio in the States. We said yes because of his wide range of experience, he's been working with numerous other bands since Yes.

Having mentioned the Progressive Rock Revival, what are your views on being associated with certain other bands in this so called revival?

Niall: It is wrong to refer to a revival, as there has been a strong support for what we've been doing over the past few years. We've always had a positive reaction, we've built up our audience through our own hard work, and we know that its not a bubble thats going to burst.

Euan: The press suddenly picked up on bands like us and lumped us all together with this Progressive Revival tag. Obviously we have been inspired by similar types of music, but Pallas play Pallas music and Solstice play Solstice music etc. The audiences know, we're not the same. Over the next few months I hope the press will see us in our own right.

Do you see any other of these "new progressives" coming through?

Euan: At the risk of sounding blase and alienating, I don't really care what any other band does. The only band I'm interested in is the one I'm in.

What is the position regarding your record deal?

Derek: Arrangements have been made and full details will be announced shortly.

Euan: Suffice it to say we couldn't be going to America unless there was money to send us there, but thats all we can say at the moment. What material will you be featuring in the forthcoming tour?

Euan: We'll be previewing the new material and playing a selection from the previous album, as many of the audiences will not have seen the Arrive Alive material live. We wont be sticking to a rigid set, we'll keep things fluid to keep things fresh.

Niall: It's a great opportunity to break in the new stuff, numbers can change with gigging, the arrangements and dynamics can be improved upon. By the end of the tour we know we'll go to the Studio and show the bands ability in the best light.
When will the album be available?

Graeme: We record in June/July so its hoped the album will be released by late Summer early Autumn, but obviously we can't be certain yet.

What other plans are in the pipeline?

Ron: The new single, Paris is Burning, is just out (May 6th), and theres the possibility of some T.V. After we return from the States there will be a festival or two, and in Autumn a major tour to coincide with the album.

All in all Pallas seem very busy in the next few months, a far cry from the isolation of their farmhouse and the snow! 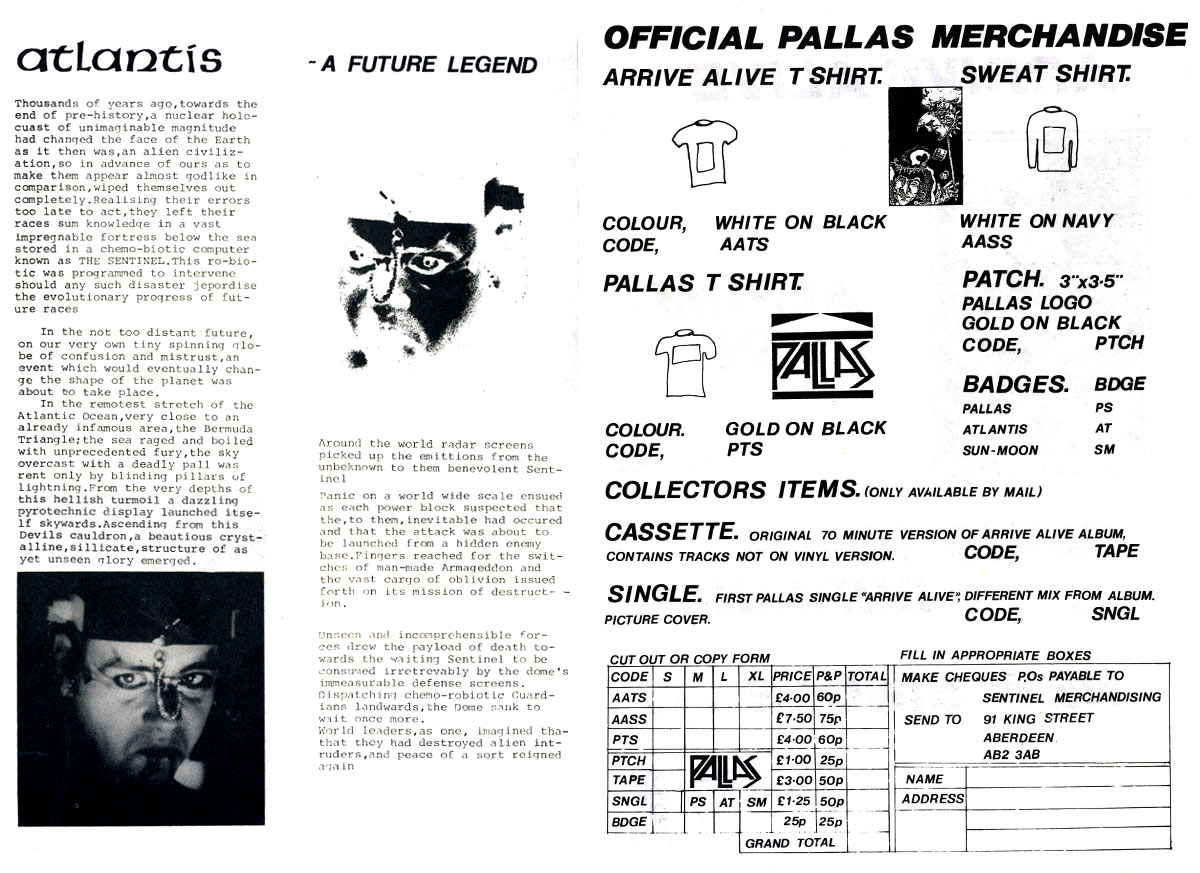 Thousands of years ago,towards the end of pre-history,a nuclear holo-caust of unimaginable magnitude had changed the face of the Earth as it then was,an alien civilization, so in advance of ours as to make them appear almost godlike in comparison,wiped themselves out completely.

Realising their errors too late to act,they left their races sum knowledge in a vast impregnable fortress below the sea stored in a chemo-biotic computer known as THE SENTINEL.

This ro-bio- tic was programmed to intervene should any such disaster jepordise the evolutionary progress of future races. In the not too distant future, on our very own tiny spinning globe of confusion and mistrust,an event which would eventually change the shape of the planet was about to take place.

In the remotest stretch of the Atlantic Ocean,very close to an already infamous area,the Bermuda Triangle; the sea raged and boiled with unprecedented fury, the sky overcast with a deadly pall was rent only by blinding pillars of lightning.From the very depths of this hellish turmoil a dazzling pyrotechnic display launched itself skywards.

Ascending from this Devils cauldron, a beautious crystalline, sillicate,structure of as yet unseen glory emerged.

Around the world radar screens picked up the emittions from the unbeknown to them benevolent Sentinel.

Panic on a world wide scale ensued as each power block suspected that the,to them,inevitable had occured and that the attack was about to be launched from a hidden enemy base.Fingers reached for the switches of man-made Armageddon and the vast cargo of oblivion issued forth on its mission of destruction.

Unseen and incomprehensible forces drew the payload of death towards the waiting Sentinel to be consumed irretrevably by the dome's immeasurable defense screens.