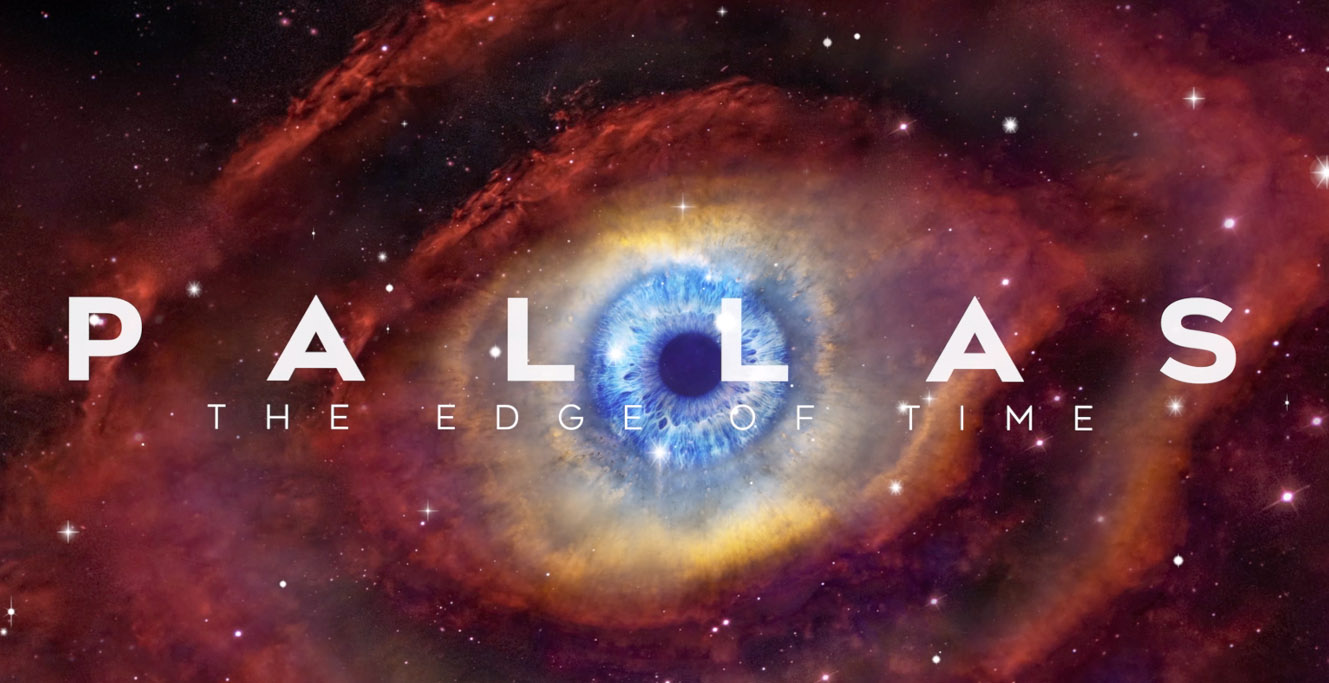 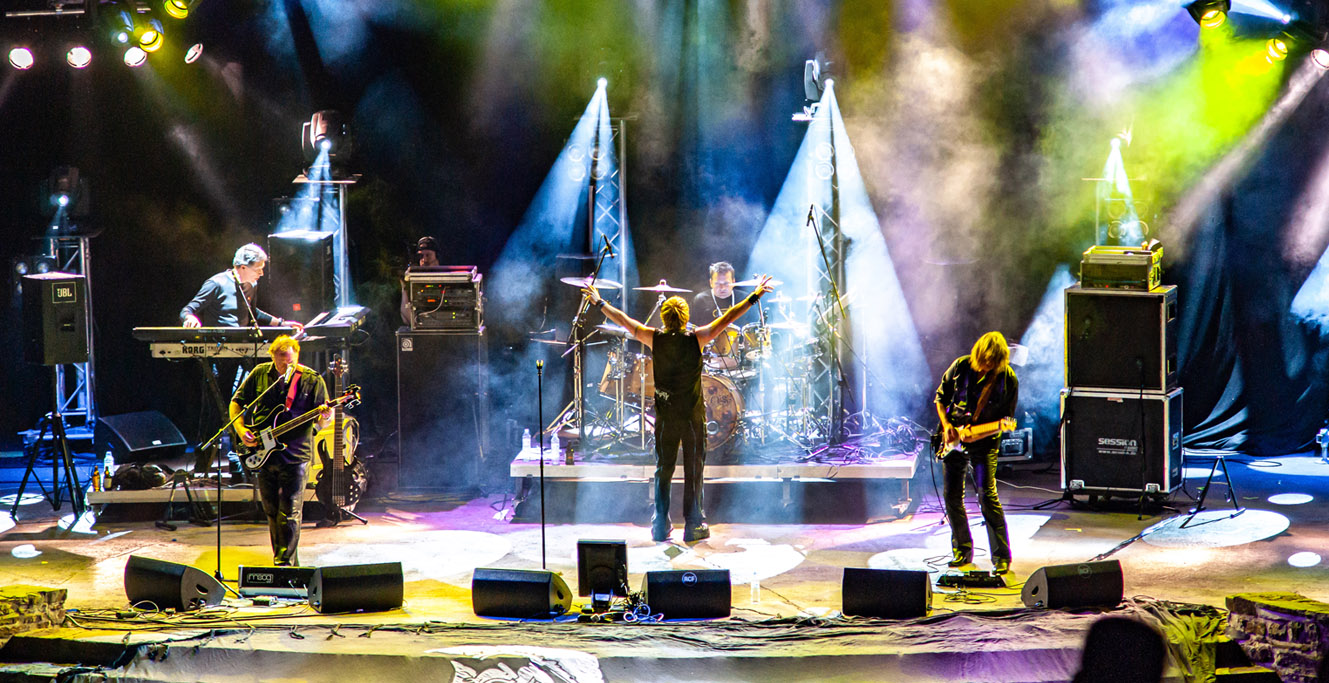 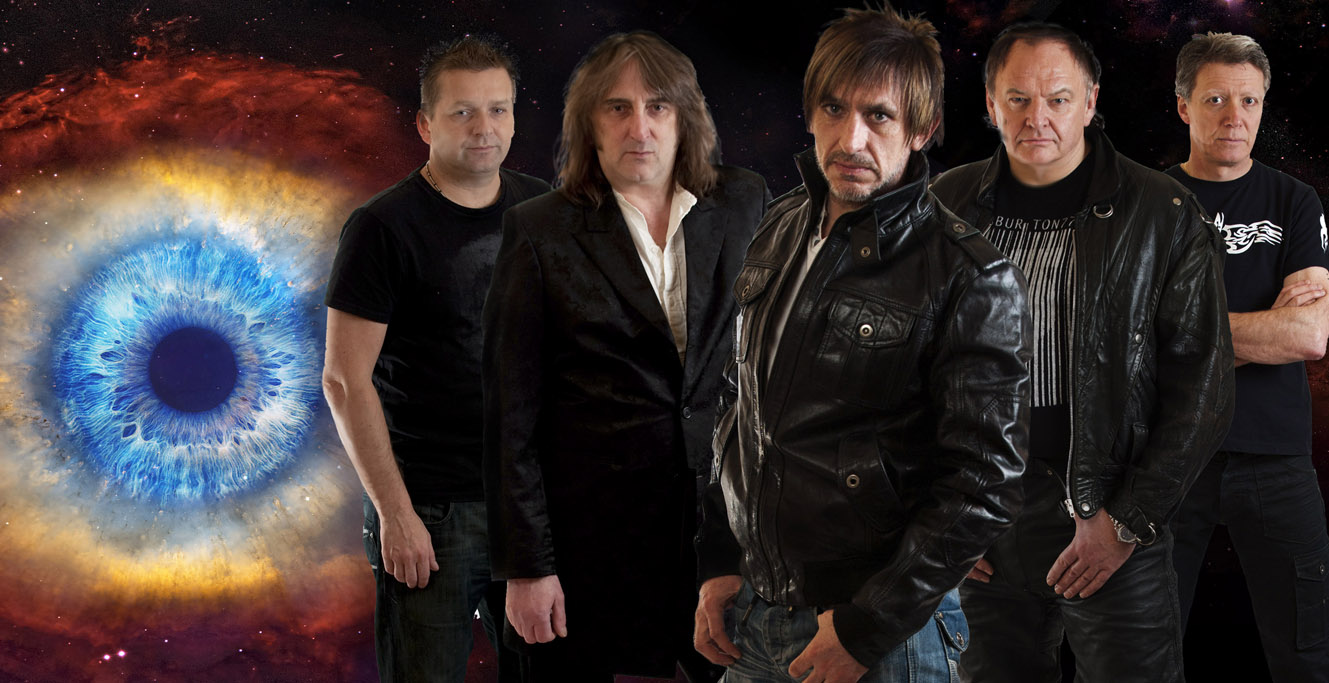 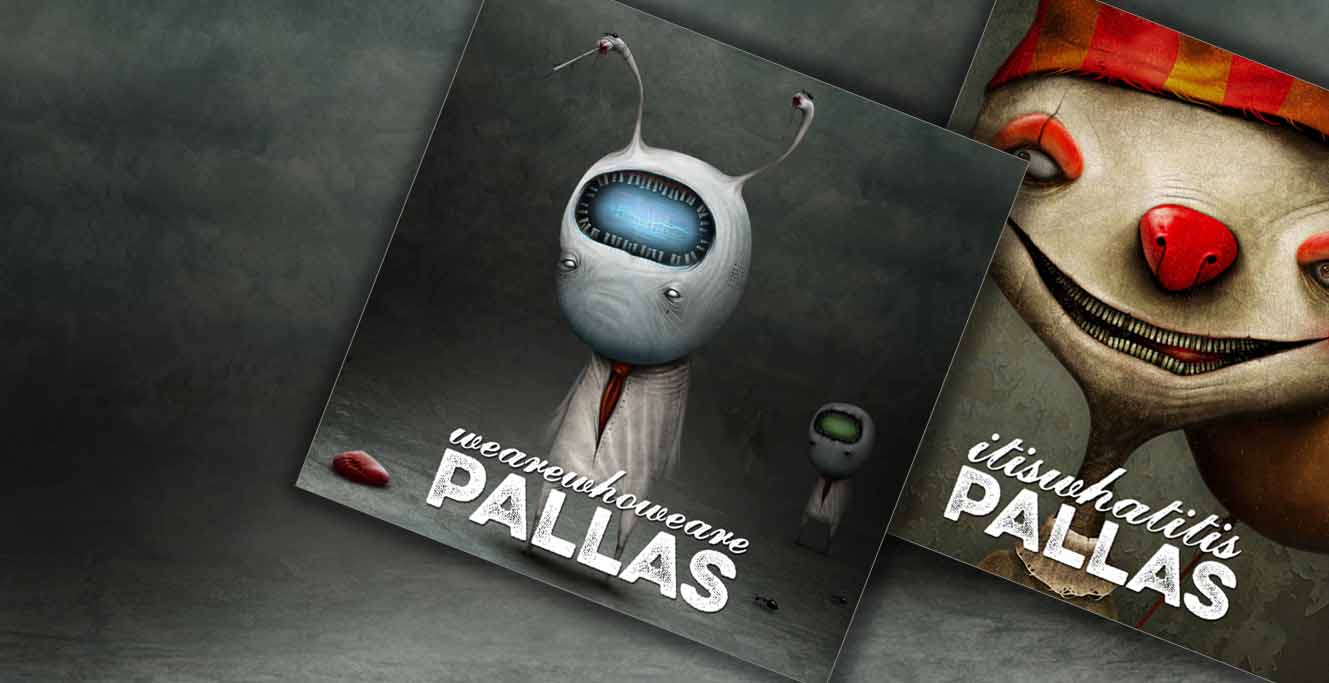 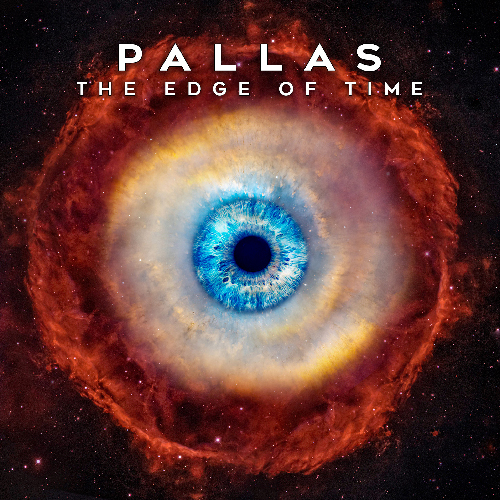 THE EDGE OF TIME

The atmospheric and orchestral remix album. 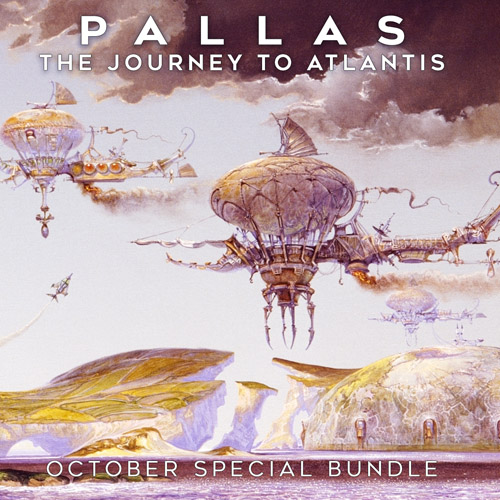 The Journey To Atlantis

Never heard before recordings from gigs from the Sentinel period. . 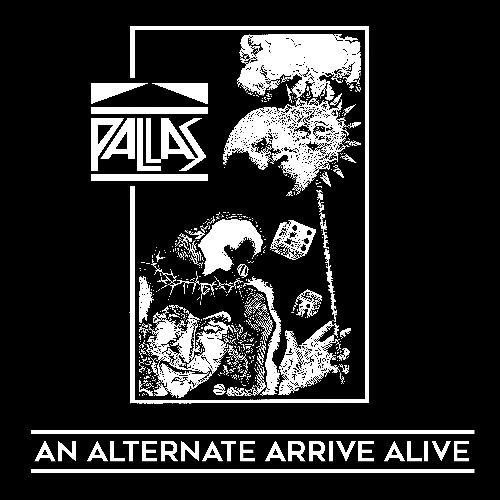 Never heard before recordings from gigs from the Arrive Alive period. . 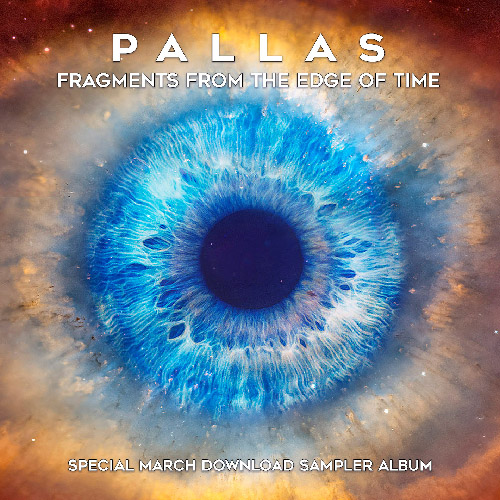 Fragments from the Edge Of Time

Over the next 9 months, in the lead up to a UK and European tour in September 2020, Pallas are embarking on far-ranging series of retrospective anthologies, including archive videos, free downloads of gig recordings and demos, as well as a series of CDs.

With such an extensive and varied back catalogue, it was fitting that these anthology CD’s would not just be re-mastering or slight remixing exercises but a deeper exploration of the band’s varied trademark sounds.The first of these retrospective anthology CD’s is entitled ‘The Edge Of Time’

THE EDGE OF TIME

The band has always featured both atmospheric and cinematic moments on albums throughout their history and this collection of new versions sets out to explore that element of the band further.

Niall Graeme and Ronnie have been involved in film music side projects and have brought added cinematic elements to some tracks, whilst others follow a more atmospheric interpretation. The overall chilled and laid back concept of the album harks back to the days of plugging in the headphones and immersing yourself in a soundscape.

Initially, the CD will only be available directly through the band’s Bandcamp site, which also includes downloads in many formats including lossless, complete with a selection of alternate versions.

The featured tracks encompass the whole of the band’s recorded career and are:

The album gets off to a relatively familiar start with the least stripped down of the featured tracks. Much of the original instrumentation of Ghostdancers, from The Dreams of Men, remains but the main focus is given to the violin parts contributed by the acclaimed Traditional Scottish fiddler Paul Anderson.

After a linking section of ambience the atmospheric Violet Sky, originally on 'XXV', features new Spanish guitar from Niall Mathewson over a lush atmospheric background.

The atmospheric vibe continues with a stripped-down haunting version of New Life originally from the 'wearewhoweare' album this mix features a gentle acoustic guitar in place of the original solo.

A new interpretation of Just A Memory, originally on ‘The Wedge’, continues the laid back atmosphere with a mellow cello taking the main melody part over a mixed percussion bed.

A radical re-interpretation of In Cold Blood, from ‘wearewhoweare’, carries us into an imagined soundtrack for a modern-day horror movie.

Delving back to ‘The Sentinel’ period the album enters an orchestral territory with a full-blown cinematic treatment of Ark Of Infinity. Originally titled after a Dr Who story the space exploration motif is continued with some parts sounding like potential Star Trek or Star Wars themes, which could only be hinted at with the technology available at its original recording.

7. The Blinding Darkness Of Science

Continuing the orchestral section of the album, The Blinding Darkness Of Science, originally from ‘The Cross and Then Crucible’ has a sense of urgency in tune with the increasing pace of technology.

8. Something In The Deep

Both atmospheric and cinematic, Something In The Deep a track originally on 'XXV', features a new end section complete with sirens calling the unwitting to the deep.

Somewhere between the Deep and the Edge of Time lies a haunted land of shimmering orchestras and ethereal voices. This Haunted Land is a track from keyboard player Ronnie Brown and his collaborator Bill Marshall which lends a special orchestral atmospheric ambience as an extended link piece to the final track

10. Stranger On the Edge of Time

Starting life in the early 80s as the experimental B side to the original ‘Arrive Alive’ single, the album concludes with this special 21st-century re-imagining of its’ keyboard pulse and mellotron quirkiness, with Paul Mackie adding some spacey vocals, the track finally fades away into infinity.

FRAGMENTS FROM THE EDGE OF TIME

:: YOUR "NAME YOUR PRICE" DONATION WILL HELP FUND STUDIO TIME TO COMPLETE THE NEXT REMIX ALBUM! ::

Last week Paul added a vocal and Niall made some more production changes to the new version of Ghostdancers that was sitting in the computer!

We expect to include a new and extended version of Invincible on the next remix album, this is a work in progress look at the end section

This is just a work in progress snapshot with Paul trying out a vocal and before a new real choir and other goodies are added, for what will be the title track

4. ARK OF INFINITY - New orchestral version as featured on The Edge Of Time CD

5. NEW LIFE - From the wearewhoweare CD

6. SOMETHING IN THE DEEP  - New version as featured on The Edge Of Time CD

9. THE LAST ANGEL - End Section remix From The Dreams Of Men CD

AVAILABLE AT THE PALLAS BANDCAMP SITE FROM SUNDAY

Complied directly from the band's own private collection of live cassettes and never heard before, this selection from the early 80's takes us back to the gigs in Scotland where every weekend Pallas perfected their craft at venues such as the Dial Inn, Cuinzie Neuk, Bungalow Bar, Ochil Hills, Rothes Arms etc.

The success of these seminal days resulted in the self-financed recording of the original cassette album 'Arrive Alive', which was then picked up by a management company and released on Vinyl, subsequently resulting in the band being signed by EMI and the recording of the groundbreaking 'The Sentinel' album.

Sit back and travel in time to the formative gigs of the Pallas sound!

1. Echoes - Once in a while, the band would play this cover version as a special treat.

There has been a bootleg of 'Echoes' doing the rounds since the early 80's when it was played as a soundcheck at a venue that was hosting a Biker's wedding in the afternoon before the gig, but this version from the Dial Inn in Glasgow has never been available before.

2. 5 to 4 - Here's a track with an enigmatic title. It was written after the original keyboard player Mike Stobbie had left the band and before Ronnie Brown joined, the band had become a four-piece rather than five-piece. This 'journey' became the narrative for the lyrics.

4. Queen Of The Deep - This track was originally written when Mike Stobbie was in the band, and this version is one of the first times that Ronnie Brown played it. Mike remains a close friend of the band and has stepped in for Ronnie a few times since he left.

5. Moonline - Another transitional track, Moonline was a song that was played by line ups featuring both Mike and Ronnie on keyboards and Craig and Euan on vocals.

6. Flashpoint - On the rockier end of the Pallas spectrum 'Flashpoint' used to raise the rafters!

7. Heart Attack - Not the first, and by no means the last, of the recurring theme of war and man's inhumanity to man in the Pallas canon, Heart Attack dwells on the threat of nuclear war.

8. Crown Of Thorns - Probably one of the most definitive Pallas tracks gets an early airing.

9. The Ripper - A pinnacle of theatrical rock this track needs no explanation!

10. The Knife/Los Endos - This was often a finale or encore in the band's repertoire for quite a few years and line ups before Atlantis was written!

We have recently uncovered the rough mixes of The Sentinel which the band took away with them from the Eddy Offord's studio in Atlanta, which gives another insight into what the LP could have been had fate not intervened.

During the last few days before the band left the Studio in Atlanta Eddy Offord sat at the sound desk with them and made a rough mix of the album - which can be compared and contrasted with the two mixes that were later released.

It is well known that the band and record company were not happy with the final mix, which had been rushed to accommodate a new project Eddy was hired for by a band with considerable more clout than they had, and a remix was made for the later american release.

We have also re-worked a previously only available as medium quality mp3 exclusive release "The Sentinel Demos" and made it available at much better quality through our new bandcamp facility to give you some idea of what a double album of The Sentinel may have been like.

This extensive archive of rehearsal and live recordings includes the tracks that would have been on the album had it been a double and never found their way onto B sides and the later CD are: A New Age Dawns, The Scrolls, The Cell, Flashpoint 2, and The Calm Before the Storm which explore the storyline in much more detail than the truncated eventual LP did.

The band recorded the rehearsals for the pre-christmas gigs at The Mill Recording Studios in Banchory and it was mixed down by Niall Matthewson in time to be available as a cd at the gigs.

The set includes some old tracks not played for some years and two brand new tracks from the forthcoming album 'wearewhoweare' appearing here with their working titles which may change over the next few months!

There's fifteen tracks which is an hour and three quarters of music at only £8 for the download, the track list is:-

The download also includes the wearewhoweare trailer video and audio, artwork and artwork for each of the gig posters !