Press Reviews for The Sentinel

Press Reviews for The Sentinel 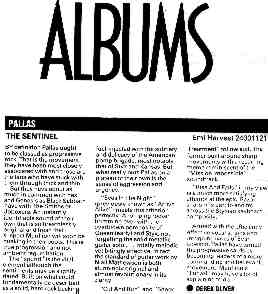 By definition Pallas ought to be classed as progressive rock. That is the movement they have been most closely associated with and those are the fans who have stuck with them through thick and thin.

But they have about as much in common with Yes and Genesis as Black Sabbath have with The Smiths or Joboxers. An instantly identifiable sound of their own that is so breathlessly original and fresh that I suspect Marillion will soon be quaking in their boots. This is true progression and not ambient regurgitation.

The "sound' is the vital element although the sentiments may be slightly dated. Built on what could fundamentally be described as a solid, hard rock backing, fuel-injected with the subtlety and delicacy of the American pomp brigade, most notably that of Styx and Kansas. But what really puts Pallas on a plateau of their own is the sense of aggression and urgency.

"Eyes In The Night" (previously known as "Arrive Alive") meets this criterion perfectly. A romping rocker brimming over with the overblown pomposity of Queen (Early) and Styx, not forgetting the solid metallic guitar solo . . . totally melodic yet bitingly effective. In fact the standard of guitar work by Niall Mathewson is both stunningly original and almost revolutionary in its clarity.

"Cut and Run" and "Shock Treatment" follow suit. The former built around sharp movements with a recurring theme reminiscent of the "Mission Impossible" soundtrack.

"Rise And Fall" in my view is a much more satisfying attempt at the epic. Razor sharp riffs dart to and fro across the Styxian keyboard pomposity.

Armed with the efficiently effective vocal strains and intriguing lyrics of Euan Lowson, Pallas have turned the progressive cards by becoming leaders of a more commanding and believable movement. Marillion's "Fugazi" may have a lot of explaining to do. 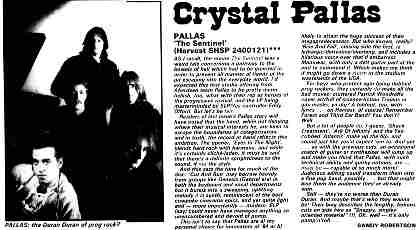 AS I recall, the movie The Sentinel was a weird tale concerning a gateway to the bowels of hell which had to be guarded in order to prevent all manner of fiends of the pit escaping into the everyday world. I'd expected this first studio offering from Aberdeen team Pallas to be pretty damn hellish, too, what with their rep as heroes of the progressive revival, and the LP being masterminded by ELP/Yes controller Eddy Offord. But let's be fair

Readers of last issue's Pallas story will have noted that the band, while not denying where their musical interests lie, are keen to escape the boundaries of categorisation, and in truth, the record at hand reflects this ambition. The opener, 'Eyes /n The Night', blends hard rock with harmony, and while it's certainly cliché-laden, it must be said that there's a definite sprightliness to the sound, if not the style.

And this sets the tone for much of the disc: 'Cut And Run' may borrow heavily from groups like Genesis (Gabriel era) in both the keyboard and vocal departments, but it bursts into a sweeping, uplifting melody a la synth, reminiscent of the best cowpoke cinerama epics, and yet quite light and — more importantly — modern. ELP (say) could never have managed anything so unencumbered and devoid of pomp.

This isn't to say that Pallas are a) my personal choice for innovators of '84 or b) likely to attain the huge success of their megapredecessors. But who knows, really? 'Rise And Fall, closing side the first, is lethargic/derivative/overlong, and includes a hilarious voice-over that'd embarrass Manowar, with only a deft guitar part at the end to commend it. Which makes me think it might go down a storm in the stadium wastelands of the USA.

For boyz who protect agin being dubbed prog-rockers, they certainly do make all the bad moves: cluttered Patrick Woodroffe cover art/full of science-fiction Trojans in gas-masks, ya dig? A foldout, too, with Iyrics . . . on Harvest of course! Remember Forest and Third Ear Band? You don't? Well. . .

But a lot of people do, I guess. 'Shock Treatment', 'Ark Of Infinity' and the Yes - cribbed 'Atlantis' make up the flip, and sound just like you'd expect 'em to. And yet . . . as with the previous cuts, an occasional snatch of guitar or synthesiser will jump up and make you think that Pallas, with such technical ability and quirky notions are— must be—capable of so much more!

Judicious editing could transform them into a fine pop band, possibly . . . but that might lose them the audience they've already won.

Still — they're no worse than Duran Duran. And maybe that's who they wanna be! Their biog describes the lengthy, tedious cuts on side two as "Snappy, singles oriented material" (!). Oh, well—it's only pomp'n'roll …… 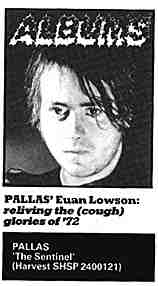 I may have mentioned this before but the point is worth repeating: the great Theodore Sturgeon once stated that 90 per cent of everything is crap, and this applies as much (if not more) to the record industry as it does to the rest of creation.

The problem we're faced with here is just where does Pallas' debut album fit into this scheme of things? Is it part of the majority (bilge), or is it amongst the coveted few (brilliant)? The only answer I can come up with is to sit the thing on the fence, which is a cop-out, I'd be the first to agree, but then 'The Sentinel' has a foot entrenched in each camp so really, there's no other place for it.

The basic problem is a disconcerting one of time-shift which is very much of Pallas' making. There are six tracks on this album of which three, 'Eyes In The Night',' Cut & Run' and 'Shock Treatment', are singles contenders jaunting along for the most part at a goodly pace and generally rocking out with the best of them. The other three, however- 'Rise & Fall, 'Ark Of Infinity' and 'Atlantis Suite' although fine tracks, sound SO dated.

This, for better or worse, is 1984, yet with these three numbers Pallas seem to have allowed Eddie Offord to hurl them back into the netherreaches of his hey-day (and also the period of the band's most influential origins). If this album had hit the streets a dozen years ago on the strength of these tracks alone it would have been hailed as a revolution!

But, like I said, this is 1984 and Pallas have allowed themselves to be buried under a mound of (admittedly) very slick production that nevertheless reeks of that early seventies 'Art Rock' feel with which Offord had so much success when producing bands like Yes and ELP (my God, even Yes had the suss to bring in Trevor Horn - the producer of the eighties sound! -to knob-twiddle on '90125').

Pallas may argue that I've missed the point and that this isn't supposed to be taken seriously that this is 'escapist' music - which is fine, but why can't we escape into the future (or even the present)? Why do we have to be dragged back through time when, Goddammit, the band have the potential to give it all to us now?!!

Pallas prove they have this potential on those three tracks I mentioned at the beginning. They're also very good to watch live, but I get the impression that EMI had them over a barrel with this album and that they were pretty much told what to do, i.e. leave it to the producer, boys, he knows what he's doing, cue long list of hit albums Eddie Offord has produced, Offord was probably in his element with those great memories flooding back to him. Maybe this shows a lack of character on the band's part, maybe they simply didn't have a choice, maybe I'm wrong, who knows? But tell me this, who the hell decided to get a Roger Dean clone to design their artwork? That's just plain asking for trouble.

If it sounds like I've got a real downer on this album that would be misleading, because it is undoubtedly superbly performed and the production, of its type is wonderful. Pallas have been given a rich, textured sound and I wouldn't hesitate to recommend this to any fan of the early seventies art bands, but for others, I'm not so sure. What I'd say to them is buy the brilliant 'Eyes In The Night (Arrive Alive)' single (which I remember plugging when it was plain old 'Arrive Alive" a song that strongly deserves to be a hit, and then go and check out the band live.

I hate to be non-committal because this album is far too good to be slagged but, on the other hand, there's too many question marks hanging over this band at the I moment for it to warrant unbridled I praise. Approach with caution.