During the Summer of '83 the band were preparing for recording The Sentinel album, and the Reading Festival still not having signed on the bottom line, Jay Williams interviewed the band for Sounds cover date 20th August 1983 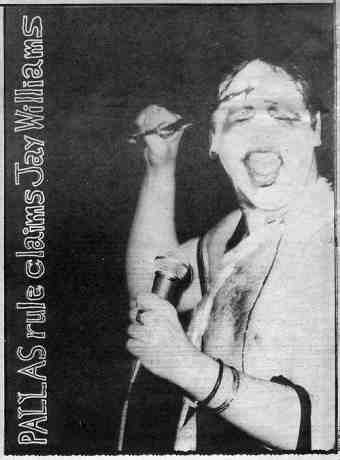 "Well this one’s got real sawdust on the floor." From outside, the Piccadilly drinking house looks promising. Once through the doors, the waft of New English Society— the smell of unbroken leather and Real Ale hastily quaffed by bright young things who don’t really like it but it’s soooo wonderfully quaint and street—permeates from across the ersatz Olde - Worlde atmosphere. A cluster of Brideshead revivalists suck cigarette holders and use Time Out speak. They remain unimpressed at the fact that we are unimpressed.

Okay, it’s a pretty verbose description of what was basically an apres interview bev, but there you go. That’s what it was like. Euan Lowson and Graeme Murray (respectively singer and bassist) of Pallas breezed into Cool King Records’ interrogation chamber and talked freely and intelligently about music and their approach to it. Note: the word ‘progressive’was mutually avoided as much as possible and was used in most cases out of convenience.

"I don’t believe it’s a revival," says Graeme authoritatively. "I think that the truth of the matter is that there is a lost generation which is not fashion conscious. A lot of people started listening to Yes and Genesis just before punk—and when punk arrived the media went ‘bang’ and they were forgotten about.

"But some of the punk things rubbed off on us— and I certainly think that we’re far more aggressive than any of the old bands that you’d care to mention. "

How have you reacted as a band to all the various changes over the last few years?

Graeme: "We’ve just soldiered on. Obviously the media interest now in what we’re doing is more than welcome by us, but we feel that we’ve known all along that it was going to happen."

Euan: "It’s only a revival in that there’s been a sudden large scale interest audience-wise and media-wise."

Do you feel overshadowed at all by the fairly rapid rise of Marillion?

Graeme: "Not overshadowed. I think they’ve been fortunate in that they landed a deal with EMI—a company who has put its full weight behind them. But I’m quite sure that by the end of the year once our album is out in September, and we’re out on a major concert hall tour we’ll start to grow in stature as well. . . in a general sense."

The topic of shelling out a fiver plus to see a band comes up. In the pub later Euan spoke animatedly of his first gig—the legendary door-keeper of Hades, Alice Cooper. Do they have the same wish to entertain and give the crowd a spectacle in that way?

Graeme: "The point that occurred to every last member of the band was that we couldn’t go out and pay money to go and see the sort of show that we wanted to see anymore."

Euan: "Using Alice Cooper as a reference point— that was something I looked forward to for four weeks. It was going to be an event—something really special—and when the night arrived I was overwhelmed by the whole thing. Nowadays the majority of the crowd is either made up of schoolkids or folk on the dole, and it’s a lot of money to fork out every week. . . so it’s got to be a wee bit special."

Graeme: "On the last club tour that we did, which was a five-week thing, one of the vibes that we picked up (I hate that phrase!) was that a lot of these new wave synthesiser bands had virtually killed a lot of the clubs because they were so boring. They were coming in and setting up two banks of keyboards and a tape machine in the middle of the stage, then they stood there and droned all night: Once you’d seen one, that was it."

In fact, that set-up is more reminiscent of the dinosaurs than any of the new progressives. Perhaps the only difference is length of songs?

Graeme: "A very fair criticism that’s been levelled at us—looking at the stuff on ‘Arrive Alive’—is that it ambles. We’ve taken stock of the situation now and instead of five tracks, the new album will have six or seven tracks."(Wow—Ed.)

Do you think you can achieve success on your own terms . . . without having to compromise too much?

Euan: "You need to have commercial success to help you keep on tour and to keep on taking your music to wider audiences, which is really what you want to do, but every band has aspects of its music that can have a commercial edge."

‘Paris Is Burning’ has definitely got that edge. It’s moody and catchy and imaginative. Do they ever see themselves moving towards the more lucrative singles market?

Graeme: "No. But the day of the out and out album has gone. I think that the record companies themselves think that they have to have singles. . . they feel they have to release a single from the album even if they know it’s not going to make the Top 30. It’s more of an advert than anything.

"In the early 70s there were a lot of sampler albums— I don’t think you see that so much now— so it’s better for somebody to find out what a band ‘s like by buying a single rather than spending five quid."

Do you think you’ve got to the stage now where you’d pay money to go and see yourselves?

Graeme: "Yes. But I’d qualify that by saying that the show we’re putting on now is going to get much better. Although we’ve been in existence for some years, we feel that we’re just in a newborn stage . . . the material on ‘Arrive Alive’ is . . . er . . . old. The best thing that has happened to us is turning professional and having the chance to spend a whole month to write new material."

When you’re faced with a month’s creativity, do you find yourselves concentrating on one particular theme?

Euan: "I think in this case, the Atlantis theme gets so much coverage and seems to become very popular with a lot of people. . . but really, this new one is a bit like a main river with a lot of tributaries. Although the songs will be linked, it won’t be a concept album, to use that dirty phrase."

Graeme: "I think it’s fair to say that we’re an impatient band. We want to go places quickly. . . we haven’t been to Atlanta to record the new album yet, and already we’re thinking about the next one. That’s the way it’s always been.

"In some respects the first few months were frustrating because there’s been a feeling that people have been waiting for the Pallas album. . . and I think that the confirmation that progressive rock (if we’re going to call it that) is alive and kicking is going to be a second band getting a major deal.

"In that respect, it’s been very frustrating for us. But now we see the road in front of us. We’re off to Atlanta for two months, and then after that we’re going on a tour of Britain and hopefully a couple of festivals as well.

"We’re planning the live show for that now, and I’ve no doubts whatsoever that we’ll have to alter our plans to fit in with our bank balance. But at the moment, it’s going to be a really spectacular show."

Owing to the fact that I ran out of tape, I am sadly unable to tell you about when Geoff Banks went on the road with Pallas and cleared the entire bus one morning with one deadly fart. Pity really.

That evening I saw Pallas supporting Uli Roth, and I was more than somewhat impressed by their ‘almost theatrical’ (I think that was the phrase I used!) stage show. Euan Lowson has the charisma which is so necessary for a frontman, and the rest of the band mould the music together with precision and liveliness.